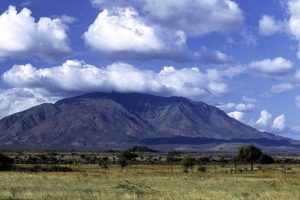 Mountain Elgon is an extinct volcano that first erupted about 20 million years ago. It has the largest intact Caldera in the world measuring 40km2. It was once Africa’s highest mountain but with erosion it was reduced to its height of 4321m making it 4th highest in East Africa. Mt Elgon has the largest base in the world at 3840km2. It is also the largest solitary volcanic mountain in East Africa located in Eastern Uganda on the border with Kenya. Mountain Elgon national park covers an area of 1145km2.

The national park was declared a UNESCO Man & Biosphere Reserve. The main tourist attraction is mountain hiking to the caldera with the highest peak Wagagai at 4321m, Sudek at 4303m, Koitobos at 4222m and Mubiyi at 4210m.

The wildlife at this park  is mainly found in the lower slopes but rarely seen in the forest setting; Defassa waterbuck, Elephants, Oribi, Bushbucks, Buffaloes and Spotted Hyena, also black-and-white monkeys, Colobus monkeys.

Mt Elgon national park is home to 296 bird species and 40 Ugandan species whose range is limited to Mount Elgon and these include black collared Apalis, Jacksons Francolin, Lammergeyer, Black-shouldered Kite, and Tacazze sunbird. If you are looking for unique birds and beautiful scenery then Mt Elgon is should be on your bucket list

The extinct volcanic mountain is an important watershed supporting a rich variety of vegetation zones ranging from montane forest to high open moorland studded with the other worldly giant lobelia and groundsel plants.
The recent development of the Forest Exploration Center at Kapchorwa allows birders access to extensive montane forest as well as the arid savanna around Moroto.