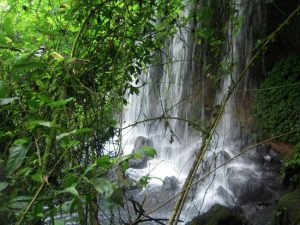 Amabere Ga Nyina Mwiru is a cave located about 10 km from fort portal town which is also the cleanest town in Uganda. Fort Portal is in Kabarole district in the western Uganda and is a hub to other parks like Queen Elizabeth national park, Semuliki national park and Kibale national park. Amabere ga nyina Mwiru are actually stalagmites and stalactites which the Batoro who inhabit this region have interesting historical stories attached to their formation hence their local name which means “breasts of Nyina Mwiru”. This site is therefore one of the protected cultural sites by the Batoro.

It is locally believed by the Batooro that Bukuku who was the king of the Batembuzi dynasty that are also said to have been demi-gods, had a beautiful daughter called Nyinamwiru. The king proposed a man that his daughter would marry but she refused this and she left her home and settled at this place. This kind of disobedience infuriated the king and his subject and he ordered that her breasts be cut off and threw them in this cave. This was done so that she would never get married to any other man that she would choose for herself. So these “Amabere ga Nyinamwiiru” are believed to be her breasts and the white substance dripping is believed to be her breast milk. There are much more features around the area that you’ll visit after the cave. There is a waterfall nearby where you’ll enjoy the breeze of the flowing water and the hissing sound of the water. When you visit this place and listen to the myths, you’ll relate because of how these stalactites and stalagmites have shapes like female breasts.

The surrounding environment of this area has other amazing features such as the explosion crater lakes which were given names according to the myths attached, that is lake Kigere which is in the shape of a foot and is believed that the depression that is filled with water was formed by a foot of one of the members of the Batembuzi.  Other crater lakes there are Nyabikere meaning a place full of frogs and Saka. This place also has stunning green hills known as Nyakasura hills where you’ll hike to view the crater lakes and villages and towns around.

These caves and surrounding areas can be visited any time of the year. They are close to the main town of Fort Portal and can easily be accessed all year round.

You can consider visiting these caves on your safari to Kibale forest national park for chimp trekking during your Uganda safaris, Semuliki national park where you’ll see the Sempaya male and female hot springs or combine it with a visit to other crater lakes in this region such as Kyaninga crater lake, Lake Nkuruba and other breathtaking places like Bigodi wetland near Kibale national park and city tours around Fort Portal town not forgetting to visit the palace of Toro Kingdom. 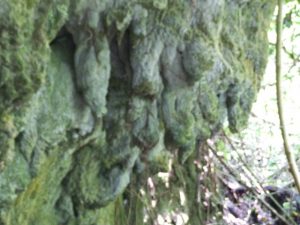