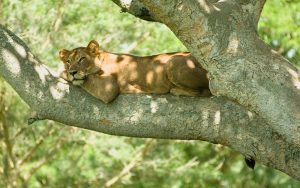 Tourism in Uganda is focused on Uganda’s landscape and wildlife. It is a major driver of employment, investment and foreign exchange, contributing 4.9 trillion Ugandan shillings (US$1.88 billion or €1.4 billion as of August 2013) to Uganda’s GDP in the financial year 2012–2013.[1]

Tourism can be used to fight poverty in Uganda. There are the tourism companies which employ people directly as drivers, guides, secretaries, accountants etc. These companies sell products to tourists, for example art and crafts, traditional attire. Tourism can also be operated online by the online based companies. Tourist attractions in Uganda include national game parks, game reserves, traditional sites, and natural tropical forests. Traditional occasions like Mbalu in eastern Uganda, boat riding, waterfalls etc.

In the late 1960s, Uganda was visited by 100,000 international tourists each year. Tourism was the country’s fourth largest earner of foreign exchange. The tourist industry ended in the early 1970s because of political instability. By the late 1980s, Uganda’s political climate had stabilised and conditions were suitable for reinvestment in Uganda’s tourist industry.