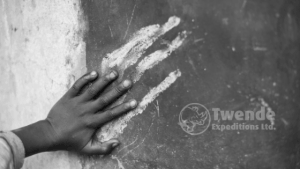 The legend of the spear and the bead; Labongo and Gipir is an interesting Cultural Story that Originates from Luo Migrations into Kenya, North Eastern Congo, South Sudan and not forgetting North and North Western Uganda.

Once upon a time there was an old man who lived with his clan in a beautiful, fertile and lush land, teeming with animals and birds in northern Uganda. The land was gifted indeed, with a beautiful river, the Nile running through it, its blue water bringing life to the land, sustaining the old man’s clan, their plants and livestock.

For a while the man, his family and his two teenage sons, Labongo and Gipir lived in peace in this paradise they had discovered when they moved south from the land called Bahel-Gazel. Days turned into weeks, weeks to months and months to years.

The old man’s health began to deteriorate and he’s strength dwindled with each passing day. Soon he couldn’t gather enough energy to get out of bed.  He summoned his elder son Labongo to speak to him.

He told them how he didn’t have much time left; their ancestors were beckoning him. He turned to Labongo and gave him a special spear.

The spear was the one that symbolizes leadership in the clan and had been passed down from generation to generation. It was now Labongo’s turn to lead and protect the clan.

The spear was perfectly decorated with carvings and it gleamed regally in the African sun. Labongo had always waited for this moment. It was finally his turn to rule and take over the clan. He promised his father never let him down.

A few days later the old man died and sadly the tribe had to move on without him. Labongo took over headship. He was an authoritative leader, but sometimes let his emotions get the better of him. Luckily there were no major wars and calamities befalling them.

The boys grew into men, took on wives and had children.  The fertile land always provided for them plenty of food and the Nile never dried up. There was plenty for man and livestock.

One late afternoon while Labongo was out hunting, an elephant strayed away from its herd and found its way to their lush maize garden. The women and children ran to their huts in fear.

Gipir who was resting inside one of the huts awoke to terrified shrieks and ran out to see what was wrong. He saw the elephant destroying their precious crop.

Without another thought, he ran to the hut where they kept their spears, grabbed one and threw it at the elephant. The elephant was injured and it ran away with the spear stuck into its side. Gipir had saved the day.

Everyone came out praising him for his bravery.

Labongo came back to find the homesteads buzzing with excitement about the events that had happened. They relayed to him the story of how Gipir single handedly went against the massive elephant and managed to chase it away.

He was stabbed with jealousy because it was he who was tasked with protecting the clan. He went to the hut where the spears were kept and Alas! He discovered his precious spear was missing. At the height of the confusion, Gipir had grabbed the royal spear and the elephant had run away with it still stuck to its side!

Labongo was livid and called upon his brother. He told him how that spear meant everything to the clan and he expected to hand it down to his son, just like their father had done to him. He accused his brother of jealousy and told him he must retrieve the spear.

Gipir couldn’t believe what he was hearing. How was he expected to trail and injured elephant and recover the spear? The forest south of where they lived was known to harbor big herds of elephants, giraffes, buffaloes and predators like lions, leopards.

Labongo was adamant. He wanted his spear. Gipir had no alternative but to bid his wife and kids a tearful goodbye. He didn’t think he would make it back. But his brother was demanding for the spear and he had to leave.

So off Gipir went into the forest. He searched for days and days sleeping under the sky and encountering many wild animals. He remained brave at first but his mission was almost impossible. How would he recover a spear from an elephant in this vast forest? Soon weeks were passing by, finally months. Gipir had become emaciated and scrawny.

He wasn’t eating enough, wasn’t sleeping well and he lived in constant fear for his life. His hands and legs were filled with wounds which were festering each passing day. With no one to talk to he was going mad. He cursed his brother, and cried for his children he would never see grow.  He had reached to limit and couldn’t push himself anymore. Wounded, diseased and starving he gave up- and prayed his ancestors would welcome him to the next life.

One day passed and Gipir wished a lion or a leopard, or even a hyena would come along and take him out of his misery. Lady Luck instead smiled his way. An old medicine woman who gathered her herbs in this particular part of the forest found him and he was saved! Gipir thought he was hallucinating and saw his grandmother who had passed come to his rescue.

The old lady realized he was incapacitated and in desperate need for help. He could hardly talk or walk but she helped him back to her small hut near the edge of the forest. She tenderly catered to him and nursed him. She treated his wounds, gave him plenty of fluids to rehydrate him and finally he was able to talk.

He told the lady of his harrowing story and she sympathized with his plight. She told him she would provide food and shelter for him while he went in search for his spear. Gipir was delighted with his turn of luck and had re-energized gusto to find the spear.

Soon he was back on his feet and able to hunt and provide meat for them. He resigned his life to the jungle and this strange eclectic old lady who reminded him of his grandmother and who had saved his life but he never forgot home.

Soon years came to pass. They lived together with their lives falling into routine. They would go into the forest together, with her searching for a special herb and him searching for the spear while both gathered and hunted what they would feed on. Days went on and more years went by.

One day while they were deep in the forest, they discovered a pile of huge skeletons. They moved closer to investigate what exactly had happened. The old woman recognized the pile as elephant bones.

Gipir moved in closer to identify what exactly happened to this elephant. And there it was! The Royal Spear! He had finally found it! Gipir couldn’t believe his eyes. It seemed like the elephant he had speared had finally succumbed to its wounds and died. Among the pile of bones was the spear, shimmering through the forest light, looking as majestic as it had years before.

He was so happy he broke into dance. He had finally achieved his mission. He could go home! He was ecstatic.The old woman was glad he had finally found his spear, but she was sad to see him leave. She had got used to having him around.

To show her appreciation, she gave him a number of special beads. This was something Gipir had never seen before. They had beautiful magnificent colors and they shone under the sun. He was so appreciative for the beads because they also reminded him of his traumatic times and how he survived. He gratefully thanked the woman and bed his farewell the next morning.

Gipir trekked through the jungle for weeks until he made his way home. The homestead dwellers saw a strange unkempt man in the horizon and thought he was one of the nomads who was looking for some water.

Until he came closer and they recognized him! A buzz set upon the village. Gipir had returned! Everyone was ecstatic and excited. Gipir came forth and presented the spear to Labongo, and his brother couldn’t help but grab him into a big embrace.

Despite everything he loved and missed his brother. He was glad he was alive. Festivities went on for days. The tribe was united. Soon days came to pass and activity died down to the mundane.

Gipir loved the beads the old woman had given him. They symbolized his endurance and kindness of humanity. He liked stringing them into beautiful patterns. One day while he was stringing the beads, the children came to watch what he was doing.

Labongo’s last born and favorite child, a toddler daughter was among them and started playing with one bead. Like all toddlers do, she put it into her mouth and accidentally swallowed it. One of the other children saw her doing this and called out to Gipir, told her she had swallowed one of his beads.

Gipir, still filled with bitterness about his brother had done, saw his chance for revenge. He went to Labongo and told him what had happened. He demanded for his precious bead. Labongo didn’t want to be bothered with trivial matters and told him that the bead would soon pass and he would get it. Gipir wasn’t having it.

He said he needed his bead at that moment exactly and Labongo had to find a way of getting it from his daughter’s stomach. That is when it sunk in what Gipir was telling him to do. To cut up his 2 year old daughter and retrieve the bead! He couldn’t believe his brother. But it was like the roles had reversed and this time someone was surely going to die.

Labongo pleaded for his brother to reconsider for hours but Gipir reminded him of how Labongo had flippantly doomed his life by sending him into the jungle for the spear and remained obstinate. He needed his bead at that right moment. Labong had nothing to do but to give up his daughter to be cut up and they retrieve Gipir’s bead.

It was finally retrieved but the clan was never the same again. Labongo couldn’t stand living with his brother and the grief of losing his precious daughter was too much. They decided to part ways. They buried an axe at a place presently called Wang-Lei in Pakwach on the shores of the Nile. Gipir and his family took the area West of the Nile and became the Alur in Northern Uganda, parts of Sudan and Eastern D.R.Congo.

Labong and his family went to the area East of the Nile moving southwards and then Eastwards into Kenya. Gipir and Labongo were the ancestral fathers of all Luo and this explains why the dialect is hardly different between the different tribes.

Wang-Lei, the place where the brothers parted ways in located near the town called Pakwach. Rituals and animal sacrifices are still performed in this area to pay homage to the ancestors. They pray for wisdom in leadership, justice, kindness and love.

Caretakers reaffirm the story and show you the place the axe is believed to be standing under the flow calm rush of the Nile. All this you can do with Twende Expeditions Ltd. on a cultural tour.