Spotted hyenas also known as the laughing hyena are the most social of the carnivore and have a very complex social behaviour. Their famous laugh is mainly to alert other group members to a source of food. The noise can be heard up to three miles away and is one of the many sounds made by them to communicate to each other.

Spotted hyenas are scavengers. They feed on kills of other carnivores and they are also skillful when it comes to hunting their on prey. Spotted hyenas are the most successful animals than other carnivores and this is due to their adaptability and cunning behaviour. They have a capability of eating larger food and also to digest skin and bones. The only parts which cannot be digested by hyenas are the hair, horns and hooves.

A safari n Uganda to these savannah national parks offers an opportunity to sight the spotted hyenas and also a chance to view other wild animals like lions, elephants, antelopes, hippopotamus, buffaloes and others can be seen. However, this is not the main tourist attraction into Uganda. 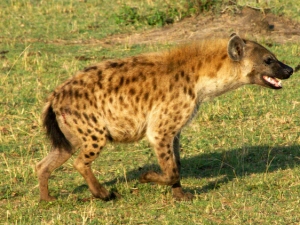