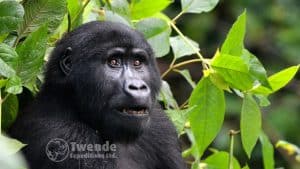 This article was written in 2015 and a bunch of things have changed since the day it was published. New changes to the Rwanda Gorilla Trekking will be in brackets. Enjoy this story from a traveler’s perspective

My friend Jill and I were staying at the modest Muhabura Hotel in the town of Musanze, peering through the window of Room 12 when the realization of what we were seeing — and will see the following day — sank in.

In this room, the legend of Dian Fossey lives on. The American primatologist famous for her groundbreaking work with the mountain gorillas of Rwanda made this chamber her second home before her mysterious murder at her mountain-top research Centre in 1985.

This December will mark the 30th anniversary of her death.

Catching a glimpse into her intimate life couldn’t have been a more fitting introduction to our Rwanda gorilla trekking experience.

With only 900 in the world, mountain gorillas are critically endangered, inhabiting the border areas between Uganda, Rwanda and the Democratic Republic of Congo (in comparison, there were only 300 in the wild at the time of Fossey’s death).

Out of the three countries, gorilla trekking is most expensive in Rwanda, where 300 of them inhabit Volcanoes National Park.

So why did I pay 750 USD for a gorilla trekking permit that would have cost 500 USD in neighboring Uganda, where I tracked chimpanzees and visited Lake Bunyonyi just days before crossing the border into Rwanda?

Generally speaking, the trek in Rwanda is less physically demanding. This was confirmed by one of my rangers who has tracked gorillas in both countries. Having said that, there’s no way to predict where they’ll be in the forest on a given day. The higher up on the hills they are, the more arduous the journey will be.

The fee for a permit in Rwanda may seem outrageous to be in the company of gorillas for just one hour, but protecting both the most endangered primates in the world and the communities that surround them is a costly endeavor. I knew my dollars would be put to good use.

The experience was worth it. Every. Single. Penny.

Ruhengeri (also known as Musanze), a two-hour, scenic drive from Kigali, is the town in northwestern Rwanda that serves as the gateway to the Virunga Mountains, an area shared with Uganda and the DRC. Rwanda’s portion of the mountain range is called Volcanoes National Park, where its most famous wild residents live.

Jill and I spent one night at the Muhabura Hotel.

Ready with our daypacks and bagged lunches, jittery with anticipation, we were driven to the headquarters of Volcanoes National Park by our guide at 6:30am the following morning, arriving just 30 minutes later.

We joined a large gathering of other visitors. Eventually, we were divided into groups of eight, each assigned to two rangers and a gorilla family. Fidel and Kari, the rangers for our group, briefed us on the Ntambara family and trekking rules before we struck out on our hike at 8:30am.

Thankfully, we spent the first half-hour on relatively flat terrain, passing through verdant farmland and the rural communities that, according to our guides, are allocated 10% of the gorilla tourism revenue to fund local initiatives (the other 90% goes towards conservation).

But upon reaching the entrance to the bamboo forest, the course took a different turn. The pace was manageable, but the steep inclines tested our strength and stamina as we made the arduous ascent with our walking sticks, leaving us breathless (at an altitude that can reach 8,200 feet, this is normal).

Initially I scoffed at the idea of hiring a porter to assist me on the journey, but I accepted the services of Alfons for 10 USD and by now I couldn’t think of a better way to have spent it. With a strong hand, he pulled me up the slopes and carried my backpack of camera equipment. I was also grateful we had a day of clear skies in November (the wet season); the climb would have been even more strenuous with rain and muddy, slippery hills.

But we got even luckier: what could’ve been a hike of several hours turned into only 1 1/2. It wasn’t long before we were greeted by rifle-toting trackers who had located the gorillas and with whom Fidel and Kari had been communicating via radio.

We were asked to set our packs down and from there on carry only our cameras.

We climbed another minute more and, in a small clearing surrounded by lush, green undergrowth, we came upon them: The Ntambara community of gorillas, all 16 of them.

Silence fell among our group of trekkers. Spines tingled. A transcendental sense of wonder rose from deep within us.

With their machetes, Fidel and Kari slashed away at the obstructing vegetation to improve our visibility. The gorillas didn’t seem to mind.

The silverback, the patriarch of the troop, was a behemoth — intimidating even as he rested peacefully.

But the fear quickly subsided. A restless youngster climbed from his mother’s shoulders onto the silverback in exactly the same way my nephews did as toddlers with their own parents. Does this sound like anthropormophization? Maybe. But these apes — which share 98% of our DNA — simply are extraordinarily, unbelievably human-like.

For a moment, I questioned whether these mysterious, fuzzy black titans of the forest were real. How did they evolve from other primates? Does our evolutionary history make them our cousins? Do they have the same thoughts as we do?

The fact is we are connected. Wonderfully, profoundly connected.

Our guides led us to another nearby clearing where we located the rest of the gorillas, huddled together and, while aware of our presence, they seemed indifferent to our movements.

But then the rambunctious one-year-old Isange tumbled out of his mother’s arms to investigate his visitors. Curious and playful, he rolled and fumbled about as the adults looked on with watchful eyes. Distance had to be maintained between us and our black-furred relatives, but the rule didn’t stop the apes from approaching us.

Isange’s mother suddenly moved towards our group, her son hanging off her arm until he lost his grip. I won’t lie; I felt a jolt of trepidation. But Fidel confidently responded with gorilla language — a discerning series of grunts — and she immediately retreated.

The interaction didn’t stop Isange from slowly edging closer to us until he was just a few feet before me. I could’ve touched his hand had I extended mine. Between the gasps and oh-my-gods, I think I stopped breathing. He was absurdly adorable.

We observed the gorillas for a half-hour more. Then, just like that, our hour came to an end.

And then I understood why Dian Fossey couldn’t, after 18 years, pull herself away from the precious subjects of her study that she so fiercely protected and championed.

To be in the presence of mountain gorillas in their natural habitat, deep in the forests of central Africa, is a rare, mystifying encounter few people have had the privilege to experience.

What You Should Know:

Permits cost 750 USD for one hour with the mountain gorillas and should be booked well in advance, especially during high season). If you travel with a tour company, however, the purchase of the permit will be handled for you.

April, May and November are the rainy season months, which can make hiking muddier and therefore more demanding. Having said that, I trekked in November and didn’t see a drop of rain all morning. Gorilla trekking is most popular during the dry season: December-February and June-September.

Rwanda is both a yellow fever and malaria zone. Be sure to get your vaccination and medication.

Beware of the nettle

What to bring: your passport, worn-in hiking boots, long-sleeve shirt and pants (a short-sleeve shirt and shorts will expose your skin to ants and the prickly nettle), gardening gloves to protect your hands as you push the nettle away and grasp at branches during steep climbs (not a must but they came in handy), insect repellent (Ben’s is one of my favorites), water and a bagged lunch (if you stay in a hotel in Musanze, ask the staff to pack one for you).

hiking boots (it can get very muddy), jacket, pants and backpack cover. An additional advantage of a waterproof jacket and pants is that they will provide a strong barrier between you and the sharp nettle.

It’s advisable to tuck your pants into your boots or thick socks to prevent ants from crawling up your legs. Alternatively, a pair of gaiters will do the job.

Depending on where they are in the forest, you may find the gorillas after one hour of hiking or three. It’s a crapshoot, so it’s best to prepare for a long climb with sharp inclines. The pace, however, is moderate and broken up with breaks.

You should not trek if you have a cold or flu. Because they are so closely related to humans but do not have the same immune system we do, gorillas can easily contract a human infection that could put their lives in danger.

To make the trek easier, walking sticks are made available at no additional cost before the journey. For a fee of 10 USD, you can also hire a porter to carry your belongings and help you up the hills. Not only is their service worth the money, hiring a porter directly contributes to the local economy.

During your hour with the gorillas: No eating or drinking is allowed; a distance of 23 ft. must be kept between you and the gorillas (although they may approach you); while the gorillas are habituated to human observers, they are still wild — keep your voice low and do not make sudden movements that might be interpreted as a sign of aggression.

Capture clear close-ups with a fast telephoto lens, which is important in a dense, heavily shaded forest where flash photography is not permitted. Increasing your ISO will also help you get your shots in the poor light, especially when the gorillas are on the move. Remember to bring something rainproof like a dry bag to protect your gear (note: Rwanda has implemented a country-wide ban on plastic bags).

An 2015 article written by Helen Sku, a renowned Travel blogger and you can visit her blog here