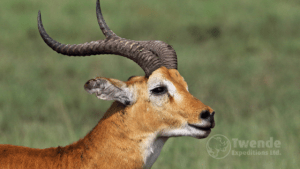 National antelope-Ugandan kob is, however, a subspecies of an antelope that lives in sub-Saharan Africa. This type of antelope also stays in flat areas, close to a permanent water source with a stable climate.

Kobus kob thomasi is its scientific name, and this type of kob appears on the Uganda coat of Arms. The Ugandan kob is a medium-size antelope with golden to reddish brown coat. It also has large ears with white patches on the throat and eye ring; forelegs are black at the front.

So only the male kob has twisted horns from the forehead. Males are larger than females weighing about 94 kg and 63 kg respectively.

Characteristics of the National antelope-Ugandan kob

The Ugandan kob is diurnal although it is inactive during the heat of the day. They are grazers, so they feed on fresh tender green grasses and drink water daily.

Breeding takes place every after eight months giving birth to a single offspring which it hides for six weeks after then it joins the herd. They also reach maturity at 18 months and 13 months for the males and female respectively.

National antelope-Ugandan kob adult males also establish territories in the best habitat which are inhabited by herds of females and their young ones. The young males live in bachelor herds and usually mark their territories by whistling.

The females, on the other hand, live in a group of about 5 to 40 separate from the males and they are more social than territorial males. Females lead the herd accompanied by males in search for water during the dry season.

Therefore, their lifespan is about 17 years in the wild. However their predators include lions, hyenas and leopards.