Africa Big five animals is a term coined back in the 1800s by trophy hunters, referring to what they considered the most challenging and dangerous animals to hunt on foot. These include the African Elephant, Lion, Leopard, African Buffalo, and Rhinoceros. Today the term is primarily famous with Africa safari travelers who now shoot the big five with a camera rather than a lethal weapon of choice. The Africa big 5 animals are all present in Uganda and can easily be seen in all savanna parks.

The phrase today is commonly used to market safaris. However, back in the nineteenth and early twentieth centuries, everyone from European royalty to American presidents wanted to bag an African hunting trophy—the larger and more unpredictable the beast, the better – how the Big Five became famous.

The big 5 animals are still hunted today, especially in South Africa, where legal game hunting is a big market with the elite and privileged. Outside of hunting cliques, public opinion leans towards disgust over the killing of the Big Five, and we may see the practice dying out.  But a shift toward tourism has also made seeing the Big Five an “awe-inspiring” goal for any safari-goer.

The Cape buffalo is of minor concern in conservation, but this also makes it the most popular animal to hunt. Hunting, poaching, and habitat loss combined mean the Cape buffalo’s population is also declining.

Where can you find the Big Five in Uganda?

Apart from the Northern White Rhino (which can only be seen in Ziwa Rhino Sanctuary and Entebbe UWEC Zoo), tourists have a good chance of seeing the other members of the Africa Big 5 in any of the four savanna parks.

A savanna safari game drive in Murchison Falls, Queen Elizabeth, Kidepo Valley, and Lake Mburo will put you in the center of nonchalant herds of cape buffalo, African elephants hunting pride of African lions. For the shy leopard, a relaxed and patient early or late evening savanna drive may lead you to its hunting joints.

A boat safari on the Nile in Murchison Falls NP or on the Kazinga channel is a great way to spot the Africa big 5 in Uganda. Especially in the dry seasons (December to February and June to July), heat is sure to bring them out to the shores to catch a sip of the fresh waters.

The largest and most imposing African carnivore, and the most sought after member of the Africa big 5, the African lion, is the most sociable of the large cats, living in loosely structured prides of typically five to 15 animals. Lions have special cultural significance in most countries on the continent. In Uganda, they enjoy a reputation as ‘king of the beasts’ and are popular symbols of royalty, strength and bravery.

In Uganda lions are mainly found in the three largest savanna parks: Murchison Falls National Park (MFNP), Kidepo Valley National Park (KVNP) and Queen Elizabeth National Park (QENP). In QENP, the Ishasha lions are known for their unique behavior of climbing trees and have been branded the “Ishasha tree-climbing lions” by tourists who flock this sector to have sight of this rare behavior.

This is the most elusive, and also the smallest, of Africa big 5 animals. Leopards are sneaky and harder to spot. Naturally shy and exclusively nocturnal, leopards spend the daylight hours hidden from view. The solitary big cats haul large kills, such as zebra or antelope, into a tree to eat alone, in peace.

These impressively shy cats can be distinguished from cheetahs by their rosette-shaped spots and more powerful build, as well as by their preference for wooded or rocky habitats. They are found in virtually all habitats which offer adequate cover, and are present in most Ugandan national parks and forest reserves.

African Elephant (Loxodonta africana), the world’s largest of all Africa big five found in Uganda and perhaps the most enduring symbol of nature’s grace and fragility, is also one of the most intelligent and entertaining to watch on a classic Africa safari game drive. A fully-grown male elephant can weigh a whooping 6300 kilos, even the smallest adult male rarely dips below 4000 kilos, which is way more than twice the weight on an average family SUV. Females are usually just over half the weight of the male.

If you’re planning your Africa safari in Uganda and would like to meet these magnificent giants, you must know that the African elephants occur in all national parks except for Lake Mburo. They are most likely to be seen in Murchison Falls, Queen Elizabeth and Kidepo national parks. We recommend you take a boat safari on the Nile in Murchison of Kazinga channel in QENP to get a sight of these gentle giants gracefully flocking the water banks in massive herds.

Africa’s only wild African buffalo ox species is an adaptable and widespread creature that lives in large herds on the savanna and smaller herds in forested areas. The African buffalo (Syncerus caffer) or Cape Buffalo, is the most dangerous of all African game species especially if wounded or solitary. Its reputation has placed it on the Africa big 5 animals recognized worldwide.

African buffalo are very large, even-toed ungulates, characterized by their stocky build and heavy horns. Horns are present on both sexes and they are not ridged. The buffalo is easily distinguished from other animals because of its dark black color and its characteristic horns smaller and lighter curving outward, backwards, and upwards. Ears are large fringed with hair and hang below massive horns.

Rhinoceros, or commonly known as, rhino is a large, herbivorous mammal identified by its characteristic horned snouts. The word “rhinoceros” comes from the Greek words “rhino” (nose) and “ceros” (horn).

Rhinoceroses are universally recognized by their massive bodies, stumpy legs and either one or two dermal horns. In some species, the horns may be short or not obvious. They are renowned for having poor eyesight, but their senses of smell and hearing are well developed.

The biggest of the five surviving species occurs in Uganda, the Northern white rhino and can only be seen in the massively protected Ziwa Rhino sanctuary and the Uganda Wildlife Education Center in Entebbe commonly referred to as the Zoo. 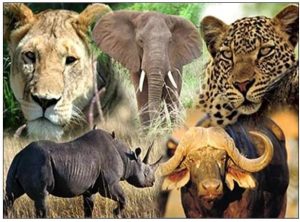