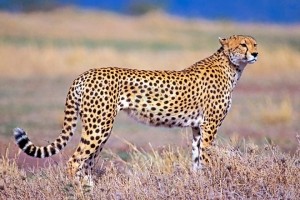 Cheetahs are described as the fastest land animals and most admired animal with striped dots, it’s one of the unique animals that can be seen during a game drive in kidepo valley national park in Uganda given the fact that it’s the only park in Uganda where cheetahs can be seen.

Kidepo valley national park is a home to a number of wildlife like four of the big five animals that is lions, buffaloes, elephants, leopards. Other animals include the, giraffes, zebras, the African hunting dogs, bushpig, bat eared fox, cheetahs among others. And the notable birds like the ostrich, kori bustard, red and yellow barbet, little bee eater among others can be seen. The  cheetahs make this park a unique one since it’s the only park where cheetahs are found in Uganda.

A cheetah is a large cat of the sub family which can be found in east Africa and inhabits dry forests, savannah and shrub forest. It has a slender body with small rounded black tear marks  like streaks on the face stretching from their eyes down to the mouth, long spotted tail and long thin legs.

Female cheetahs live with their offsprings in home ranges, whereas adult males are sociable despite forming their own group called coalitions. They can run at a speed of only 64km/h while hunting due to their unusual ability to accelerate. Theyhave got a gestation period which is close to 3 months and results into offsprings of typically 3-5 in exceptional cases up to 8 cubs.

They are much lighter than lions, females weigh 126 kg while males weigh 186kgs. They have smaller heads compared to other wild cats. They are said to be the world’s fastest land  mammals and Africa’s most endangered wild cat specie.

They are so active during day especially in the cool mornings and in the late evening whose major activity is hunting. They mainly prey on small antelopes and gazelles which they stalk within 100-300meters, charge towards them and kill them through biting their necks until suffocation. They have nice looking black tear like marks that runs down its face and then reflect light from the sun, this brings unique separation from the similar leopards.

Despite the fact that they are the fastest animals, they aren’t the strongest, instead they are weakest among the big cats.