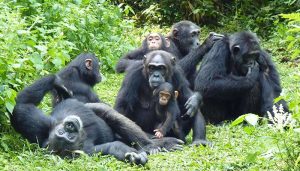 Kibale Forest is highly powerfully and mysteriously attractive to nature lovers who come to view a wide range of forest birds and track chimpanzees and other twelve primate species (the highest on the continent) that find refuge within the park.

The park’s scenic appeal, chimp tracking cost, and the rising number of safari accommodation choices make it one of Uganda’s top destinations and a great alternative to the southern gorilla destination Bwindi Impenetrable National Park.

Kibale is contingent with Queen Elizabeth National Park in the south and occupies undulating terrain on the western plateau, slightly tilted to the south. Its rainforest waters are drained by the Mpanga and Dura rivers flowing in a southern direction to empty into Lake George.

About 229 species of tree and shrub have been recorded in Kibale. In the ’05s, while still a Forest Reserve, the area was subjected to varying intensities of logging and several compartments are at various stages of regeneration.

The other half of the park is occupied by grassland and swamp communities, planted with non-native trees of Pinus and Cupressus. However, these are currently being removed. In other parts, the grassland is being colonized by natural forests.

The Lake George Ramsar Site cuts across the extreme south-western corner of the park, south of Rwimi river. At Kanyawara, towards the north of the park, Makerere University Biological Field set up a research station with a substation at Ngogo. The park also has an ecotourism site near the park headquarters at Kanyancu, where most park tourism starts.

The Kibale National Park area is the last Ugandan stronghold of the red colobus, although small numbers still survive in Semliki National Park. Visitors who do both the forest and the swamp walks can typically expect to see around five or six primate species.

Kibale National Park also has forest elephants, smaller and hairier species than the more familiar savanna elephant. Elephants frequently move into the Kanyanchu area during the wet season, but tourists do not often see them.

Distribution of animals in Kibale

Six out of the nine most common species sighted in Kibale are primates.

Redtail monkeys and mangabeys are easily sighted throughout the park, and their highest density occurs in the south and central regions.

Baboons are found in both forest, grassland, and Acacia-grassland areas. They’re most common in the central and southern regions of the park, and long-term researchers have observed that their populations seem to be slowly expanding to the north.

You can find the beautiful black-and-white colobus (Colobus guereza) and red colobus throughout the forested areas of the park, with a fair amount of spatial variance between areas in their abundance.

While you can find chimpanzees throughout most of the park, we did not find them; they don’t go in the grasslands to the far south; they’re most abundant in the central and southern forests close to the Dura River.

Observe the highest densities of elephants in the eastern and central parts of the park; both areas mainly comprise forest and grassland.

Buffalo is most common in the southern and central areas of the park. A high density of buffalo occupies the south where Kibale connects to Queen Elizabeth National Park, indicating movement between the two parks.

Lastly, you can find bush pigs throughout the park, except for the very southwest grassland area of the park.

Otherwise, the birds’ checklist for Kibale National Park includes a similar range of forest birds to Semliki National Park, excluding the 40-odd Semliki ‘specials’ and the inclusion of a greater variety of water grassland species. The rare Green-breasted pitta can be sighted around Bigodi, while the genuinely enthusiastic might want to look out for Prigogine’s ground thrush, a presumably endemic species or race.

The best birdwatching spot in the Bigodi Wetland Sanctuary, where patrons have laid out a four-hour trail, and experienced guides will be able to show you several localized species which you might otherwise overlook.

More than any other park, the cost of the visitation fee is a consideration when planning your itinerary, given the additional attractions just outside the park. It obviously doesn’t make sense to pay for the park entrance and check into park accommodation.

Then, with the 24-hour clock ticking, head off for ‘out-of-park’ birdwatching in the Kiliingami and Magombe swamps near Sebitoli and Katiyancliti, respectively.

No park fee is charged for passing through the park on the Fort Portal-Kamwenge Road, staying at the guesthouses in and around Bigodi, or visiting the Bigodi Wetland Sanctuary.

The most popular activity in Kibale National Park is the guided chimpanzee tracking excursion out of Kanyanchu almost as popular is the guided walking trail through the Bigodi Wetland Sanctuary, which is probably better for general monkey viewing and one of the finest birding trails in the country.

There is also plenty of potential for unguided exploration in the area, along the main road through the forest and around Bigodi trading center and Kanyanchu Camp. If time is limited, it’s advisable to do the activity that most interests you in the morning — this is the best time to see chimpanzees and when birds are most active.

A highlight of any visit to Kibale National Park is the chimpanzee trekking excursion that leaves Kanyanchu Center at 08.00 and 14.00 daily.

Chimp sightings are not guaranteed on chimp treks, but the odds of encountering them have significantly improved in recent years and now stand at around 96%. The chimpanzee community, whose territory centers on Kanyanchu, is well habituated, with the result that visitors can often approach within a few meters of them.

While in the forest, you can expect to see at least two or three other types of primates, most probably grey-cheeked mangabey and red-tailed monkeys.

You will hear plenty of birdsong, but it’s challenging to see any birds in the heart of the forest. You’re better off looking for them in the rest camp and along the road. The guides are knowledgeable and will identify various medicinal plants, bird calls, and animal spoor.

For dedicated chimp enthusiasts or aspiring researchers seeking field experience, join a chimpanzee habituation experience, which involves staying with the chimps all day with habituators and taking notes on their behavior.

A one-day chimpanzee habituation experience for foreign non-residents and residents costs USD 250 per person, and East African Nationals cost UGX 250,000 per person. The cost includes guide fees and park entrance but not accommodation.

Another novelty is a guided night walk with spotlights, which runs from 19.30 to 22.00 daily, costs US$40 per person, and offers a good chance of sighting nocturnal primates such as the bushbaby and potto.

Tourists are forbidden to walk along forest paths or in Magombe Swamp without a guide, but they can walk unguided elsewhere. Kanyanchu itself is worth a couple of hours’ exploration. A colony of Viellot’s black weaver nests in the camp, while flowering trees attract various forest sunbirds.

You can also expect to see or hear several robin and greenbul types, often difficult to tell apart unless you get a good look at them (little greenbul and red-capped robin appear to be most common around the camp). The camp’s specialty is the localized red-chested paradise flycatcher, a stunning bird that’s very easy to find once you know its call.