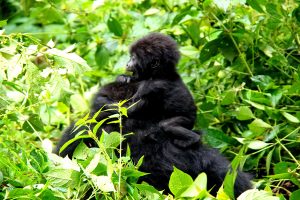 The Gorillas in the mist in the misted mountains of Uganda, Africa, home to imperial silverback gorilla are quickly becoming the hot and haute destination for the ultimate trip of a lifetime. Blissfully off the beaten path and virtually untouched, the landscape here is nothing short of epic. It includes razorback mountains – the tallest in Africa lush, terraced hillsides positioned above blues lakes, wide expanses of safari parkland and humid rainforests. Honeymoon here and you’ll sail past hippos on the Nile River, drive by a lioness resting in tall Savannah grass and trek into the mountains for a glimpse  of the endangered gorillas. And end your days lounging in front of the fire or splashing in your private pool in a luxe bands (villa hut).

Where the borders of Uganda, Rwanda and the Democratic Republic of Congo meet, there’s a collection of ancient volcanoes, emerald hills and sapphire lakes. Terraced slopes are planted with Irish potatoes that sprout with purple flowers, and rising above are the imposing Virunga Mountains where the world’s only surviving mountain gorillas roam in Mgahinga Gorilla National Park. Trekking through bamboo to spend time with these magnificent creatures is a uniquely otherworldly experience. Watch as a silverback breaks off s 25-foot bamboo stalk as if it were a twig or a playful baby rolls down as lope behind his mom. There are just around 900 left in the world and organizations like the Gorilla Doctors and Uganda Wildlife Authority spearhead the conservation pf the Nyakagezi gorilla family that lives in Mgahinga and the 12 families in nearby Bwindi Impenetrable National Park. After a hard day’s hike, it’s glorious to return to the comfortable Mount Gahinga Lodge, one of Volcanoes Safaris’ four lodges, where you can sip milky, spiced Ugandan tea by the fire. Also do a cultural visit with the Batwa Tribe, the indigenous people who have been forced into the lowland and farms by deforestation.