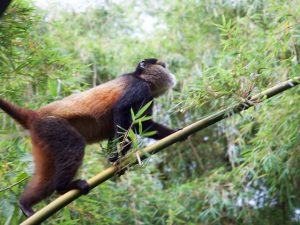 The ultimate golden monkey trekking experience, all the things you need to know about visiting the golden monkeys of Rwanda and Uganda, where to stay, the permit costs, tour operators, when to go and general information about these apes.

Golden monkeys are known to have unique characters and are a rare species that are endangered at the moment and they are currently found in the Virunga Mountains in Rwanda. They are easily recognized due to the yellow patches that can be seen all over their bodies. The Golden monkeys are also known as ‘the Old world monkey’ and the only way to separate these primates from others is by their noses. There is a unique character about the golden monkeys and that is most of the monkeys have their nostrils pointing to the sides but if you look closely at the golden monkeys, their nostrils face upwards.

Golden monkey trekking in Rwanda mostly takes place in the Volcanoes which is found in the Virunga Mountains and it has only one session per day which starts in the morning. Those who are willing to take part in the golden monkey trekking are advised to report at the headquarters by 7:00 am for a mini briefing about the trek before it starts and it is only fifteen minutes away from the Park.

The permits for golden monkeys trekking in Rwanda go for  $ 100 Dollars each and the beauty about the gorilla trek in Rwanda is that it does not limited the age of the people who are to participate in the trek and the number of people.

The monkeys are easily found since most of them live just right below the Volcanoes Mountain and can be seen swinging from the bamboo trees in the forest. The tourists get to see monkeys which have short tails that were cut off because they got stuck in the bamboo trees and they get an hour to view the creatures and get to know about their different characteristics from the experienced your guide who goes with them. The easiest way to track them down is by following the left over bamboo shoots which are always left by the monkeys after eating. The monkeys also move out in the open and feast on the cones and food in the fields owned by the farmers near the forest making it easy for the tourists to see them as they swing back and forth.

They live in the Albertine region and they are Albertine Endemics. Endemic refers to species that are confined in that specific area. The Albertine region refers to the area which is filled with valleys and Mountains including various tree species that make up the forests surrounding the area and after looking at the various traits of the Golden monkeys, we are about to find out how to go for the golden monkeys trekking Safari in Rwanda, where to go and what you need on this tour.