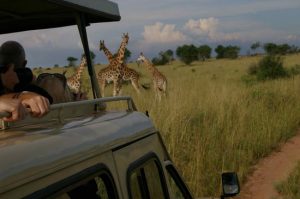 Murchison Falls Game drive is one of the best ways to see and appreciate the rich diversity of Wildlife in the Park. This park is home to different wildlife species including 451 bird species and over 76 types of mammal including the Buffaloes, Jackson hartebeests, Antelopes, Lions, Kobs, Giraffes, Hyenas, Bushbucks, and Warthogs among others. They are widely spread all over the Savannah grasslands, grazing or hunting for prey. This makes the park’s landscape so amazing for a game drives while on a Uganda Safari.

Murchison Falls National Park is positioned in the Northwestern part of Uganda and covers an area of 3,840sq km, about 5-6hours drive from Kampala. It is the country’s oldest and largest national park and hence you can spot the Big 4, leaving out the Rhinos that became totally extinct by 1983; good news is that they were re-introduced in Ziwa Rhino Sanctuary by 2005. The park is also bisected by the renowned River Nile (the longest in the world) into two part: the Northern bank and the Southern bank.

WHERE TO DO A GAME DRIVE IN MURCHISON FALLS

Game drives are best done along the Northern banks since that’s where you can find a large concentration of wildlife living in its Savannah plains whereas the Southern bank has a smaller number of antelope herds and other wild animals.

There are different Game drive tracks found in Murchison Falls National that are followed while on a game drive such as; Albert, Victoria and Buligi tracks. Taking all these tracks while on the game drive gives you a totally different experience since each is endowed with various eco-systems. The Buligi is a 7km track north of Paraa and is among the most commonly used tracks for game viewing. Also areas like Nyamsika gorge is home to a big number of water animals which come to get water and Nyamsika cliffs have a higher concentration of buffaloes, lions as well as different birds like the Egyptian plover and the bee-eaters.

Game drives are an all year round activity. There is nothing as thrilling as watching predators such as lions make moves after their prey, it’s an amazing experience since most antelopes are hunted down and killed without noticing. All this is best observed during the dry season where the grass is short so game viewing is at its best. During the rainy season the grass is a bit tall hence give challenge especially during game viewing since some animals might be missed out.

When we talk about the times for conduction game drives in the park, there are two main schedules and that is early morning and evening game drives and these take between 2 to 4 hours. However game viewing can best be done in the morning from 6:30 am, and if at all you slept in a lodge at the southern bank, you are required to cross the river by the ferry at around 7:00am. the evening game drives on the other hand start around 4:00pm local time.

All these Uganda safaris game drives can be done only on the Northern bank of the River Nile in Murchison Falls National Park which is covered with savannah; hence tourists can view game very well. For a thorough game drive within the park approximately 5 hours can be enough. 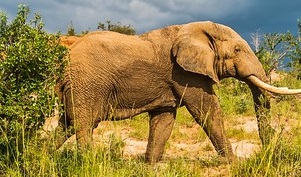