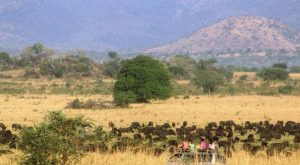 Game Drives in Kidepo Valley National Park – Kidepo valley national park is one of the national parks with a high concentration of animals in Uganda. The park is situated in the north eastern part of the country characterized with rugged semi-arid valleys which are found at the border of Uganda with south Sudan and Kenya. Kidepo valley national park is the most remote national park in Uganda and visitors who visit it start enjoy the adventurous experience right from the travel moments during Uganda safaris, tour around the wilderness plains, having good views of the wildlife at a distance and the spectacular views of the scenery and landscape.

Kidepo valley national park is a home to a variety of game including the “big four”; lion, leopard, elephant and buffalo. Other animals found in the park are cheetahs, hyenas, Kangoni, giraffes, zebras, warthogs, bush duiker, elands and water bucks among others. Most of these animals are seen on day game drives which are conducted in the morning or evening in the most recommended areas that is the Narus Valley and Kidepo valley. The Narus valley attracts more animals because it has a permanent water point where animals concentrate more especially during the dry season when the temporary water points in the region are dry. Ostriches are large birds of the park that are often spotted during game viewing moments.

Night game drives are also allowed in the park and a ranger guide from the park has to move with you in the vehicle. Night game drives here take place in the Narus Valley and they enable tourists to sight some nocturnal animals such as cheetahs, reedbuck and Guenther’s dik-dik as well as some predators trying to hunt. You’ll use a touch that produces very bright light to help you view the animals in the darkness.

Best time for wildlife viewing in the park

The best time to visit Kidepo Valley national park to view most of its wildlife is during the dry season when most of them are concentrated along the water points in the park. The long dry season is from September to March with the hottest months being December, January and February. During this period, game drives are conducted early morning. The rainy season too will offer the best of wild viewing because animals can easily be spotted scattered around the plains and the rains rarely limit movement since the ground is dried by the sun in a short time.