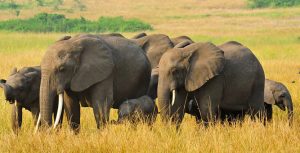 Fun facts about Uganda- Uganda is a country that is located in East Africa. It is bordered by South Sudan to the north, Kenya to the east, Tanzania to the south, Rwanda to the southwest and Democratic Republic of the Congo to the west.

Uganda is a landlocked country with breathtaking landscapes, flora, and fauna. Winston Churchill named Uganda – the pearl of Africa in 1908, due to its vast scale, profusion of birds, insect & reptile making it one of the top destinations for an African Safari.

The fun facts about Uganda include the following;

1. Uganda is the second largest landlocked country in the world in terms of population. It falls second only to Ethiopia.

3. Uganda is one of the few places on Earth where you can still find the endangered Mountain Gorilla. It is estimated that half of their population lives in Uganda (in the Bwindi Impenetrable National Park).

4. In Uganda, you don’t wear Rolex, you eat it. Don’t be confused. Rolex is a type of fast food where an omelette is wrapped in a chapatti (Roll eggs = Rolex). Ugandans love it so much that they have created an annual Rolex festival that is meant to celebrate this street food.

5. Watch out for the food in our plate. You might be eating a grasshopper. Oh yes, pan-fried grasshoppers are considered a delicacy in Uganda.

6. Lake Victoria in Uganda is the largest lake in Africa. It is also the second largest freshwater lake in the world. Lake Victoria is one of the Nile River’s sources and is even said to be where it begins.

7. Uganda has a young population. With 48% of the population below 15 years of age, it is the second youngest country in the world.

8. There are only a few countries that the equator runs through. Uganda is one of them. In Uganda, the equator is located 75 km south of Kampala, where you can purchase memorabilia and watch cool equator water experiments.

9. Uganda is one of the most ethnically diverse countries in the world. It is said that if you pick two people randomly, they would most of the times be of different ethnicity. The largest groups are Baganda, Banyankole and Basoga.

10. Uganda is the second largest producer of bananas in the world, falling second only to India. The country produces an estimated 12 million tons annually.

11. Large families are preferred in Uganda. The country has one of the world’s highest fertility rate at 5.8 children per woman. Sadly due to because of the early age of childbearing and short birth intervals, the maternal mortality rate is also very high in Uganda.

12. Uganda is one of the world’s poorest and least-developed countries. Unemployment is a huge concern in Uganda and many locals find work with local cottage industries and many are still unemployed.

13. Despite being poor, Uganda hosts more refugees than any other country in Africa. The refugees are mostly from the neighboring countries of DRC or South Sudan.