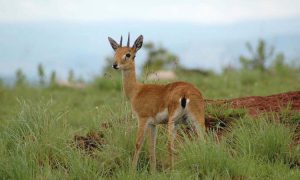 These national parks are managed by Uganda Wildlife Authority and have long been the center of tourism in Uganda attracting thousands of visitors annually. Each of them has diverse tourism activities to offer to tourists that range from wildlife viewing, chimpanzee tracking, gorilla trekking, golden monkey trekking, nature / community walks, canoeing and so much more. For gorilla trekkers, Bwindi is definitely a haven for you! This national park harbors over half the total population of the remaining endangered mountain gorillas in the whole world. These gorillas are divided into families and distributed according to the sectors of Bwindi in their respective habitats. Where as some are so far away, you can’t fail to see mountain gorillas in numbers when you visit Bwindi especially during the dry season.