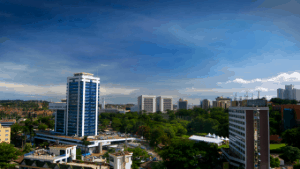 Tropical. Rainy seasons, March to May, and September to November; dry seasons, December to February and mid-June to mid-august. Mean annual temperatures range from about 160C (610F) in the southwestern highlands to 250C (770F) in the northwest; but in the northeast temperatures exceed 300C (860F) about 254 days per year

Uganda is landlocked. The south of the country includes a substantial portion of Lake Victoria. The center is dominated by Lake Kyoga

The official language is English, although many other languages are spoken in Uganda.

The greater part of Uganda consists of a plateau. Along the western border are the Rwenzori Mountains. The eastern frontier is dominated by Mount Elgon, while the Western Rift Valley runs from north to south through the western.