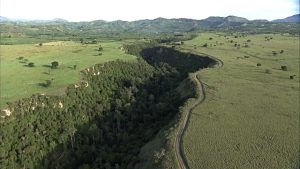 The Kyambura Gorge  chimpanzee trekking experience is more than discovering chimpanzees in their natural environment: it teaches visitors about the ecosystems of Kyambura Gorge’s atmospheric “underground” rainforest, including vegetation types; bird identification and behavior; and chimp and monkey ecology.

Kyambura gorge is an underground tropical forest found in Queen Elizabeth National Park. The Gorge is 100 meters deep and about 1 km long. It is an extension of the Kyambura Game reserve which is part of Queen Elizabeth National Park. Kyambura gorge is characterized by dense tropical rain forest that are home to a large number of birds, primates and mammals like elephants and hippopotamus. The Gorge is surrounding by vast summer grasslands on all sides although human plantations and villages are not very far off.  The surrounding Savannah receives a lot of sunshine while the gorge itself is remains relatively cool because of the tall trees less direct sunlight. The river Kyambura is a key water source and flows right in the middle of the forest providing water to the plants and animals throughout the year. River Kyambura gets most of its water from the rocks surrounding the gorge and during the rainy season.

Chimpanzee tracking is arguably the most attractive thing to do in Kyambura Gorge – and why not? Chimpanzees are man’s closest relatives and are highly intelligent compared to most primates. They can walk on two legs like us and though for short distances because they prefer using all four limbs. Chimps live in communities of between 30 to 80 members. Large groups are divided into smaller groups that feed separately before getting back to the group before night.  They build nests on top of trees for rest in the afternoon and at night. Building the nests takes a very short time and is done by bending several tree branches together to form a comfortable chimp couch.  The most active part of the day for chimps is after getting out of their temporary nests in the morning. They start by picking up fruit randomly in the morning becoming very selective as they get fuller in the afternoon. Because of their high level of intelligence, Chimps will use stems to fight of enemies including humans. The same stems can be used to remove/lure termites out of their holes. Although chimps feed in mainly fruits, they will kill small antelopes and other primates for food. The hunt is organized in a group in which the unfortunate victim is chased, corned and eaten.

For thousands of years, the chimps in Kyambura Gorge would cross over to feed and mate other chimp communities in forests like Katsyoha- Kitoma, Maramagambo and Kalinzu through a natural and smaller forest corridor. This forest corridor was completely destroyed by humans through deforestation and setting up new settlements. The chimps became trapped in the gorge. The only path to the other forests is through the Savannah which is full predators like lions, leopards and hyenas.  The chimps had no alternative but to remain in the gorge and forge a life for themselves. Scientist fear that inbreeding could lead to mutations and slow birth rates.

Chimpanzee trekking in Kyambura Gorge has two sessions (Morning and afternoon). The first sessions start early in the morning with a briefing at the visitors Center close to the Gorge. To track chimpanzees in Kyambura Gorge, one needs to first acquire permits from the Uganda Wildlife Authority. The permits are got from the park offices in Mweya. The Authority issues only 8 permits for each session hence a total of 16 permits per day. From Mweya visitors need to drive to the gorge for briefing. After the briefing, visitors are assigned a walking stick and Guides to lead them down the gorge. The first task is to go down the 200 meter slope up to the river down the valley. Chimps are very vocal and their location can be identified by following their hoots and distant cries. In case they are quiet, their footprints (in mud) and poop can help in locating them. Once you locate them, you will be able to watch them play, breastfeed, mate, rest and even fight. The chimps in Kyambura Gorge have a remarkable habit of getting down the trees each time they see visitors. This allows for great photos from a close distance.  Apart from the chimpanzees, hiking down the gorge exposes visitors to unique and amazing biodiversity. Visitors will have an opportunity to spot rare vegetation and tall tropical trees. The whole activity takes between 2 to 3 hours. 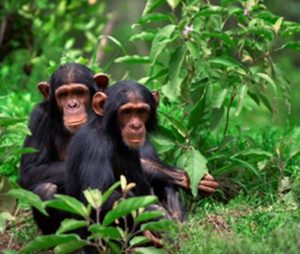