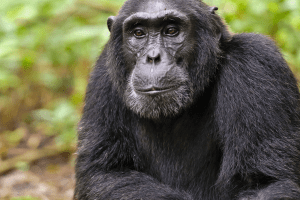 Where to do Chimpanzee tracking?

First of all, the Chimpanzee tracking can be done in Budongo-Kaniyo Papidi forest in Murchison falls, the Kyambura gorge and Kalinzu in Queen Elizabeth, Kibale National park and Ngamba chimpanzee sanctuary.

Secondly, Trekking is mainly done in the morning and afternoon for only one hour. However one can have the chance of experiencing the Chimpanzees in their natural habitat for a full day from the time they densest till they nest.

Thirdly, This experience is known as Chimpanzee habituation and its done in Budongo and Kibale forests.

Kibale Forest National park is the most popular and one of the major chimpanzee attractions known for its habituated chimpanzees, man’s closest relative.

The forest is home to other species of primates like the vervet monkeys, the endangered red colobus monkeys, olive baboons, grey-cheeked mangabeys, red-tailed monkeys, bushbabies, black and white colobus, and the L’ Hoest monkeys.

Birdlife is also abundant with about 325 bird species. Trekking is mainly done in the morning and afternoon.

Kalinzu is located in Bushenyi in Western Uganda on the west of Ishasha adjoining Queen Elizabeth and Maramagambo forest with an area of 147 sq. km. It lies in an altitude of1400m above sea level.

The reserve has about 300 chimpanzees with 40 that have been habituated. Other primates to see during your visit to Kalinzu are baboons, the endangered red-tailed colobus monkeys, l’ hoest, the blue monkeys and the black and white monkeys.

Chimpanzee tracking permits are cheaper in Kalinzu compared to Kibale and Budongo forests. Accommodation is mainly camping at Nkombe the Forest station.

Otherwise, visitors can drive to Bushenyi for better and decent accommodation.

Kyambura gorge lies on the North-Eastern side of Queen Elizabeth 30km from the park’s headquarters. It’s the only home to primates in Queen Elizabeth known as the valley of apes and well known for its huge concentration of primate life.

The gorge is a shelter zone to Queen Elizabeth because it’s fed by streams of water that keep the forest rich in food for the wildlife and Primates that visit the gorge.

Apart from the Habituated Chimpanzees, other primates spotted are Red-tailed Monkeys, Baboons, Vervet monkeys, and the Black, and white colobus. The gorge has a variety of birds that include the African finfoot, the blue-headed bee-eater, and the Falcon.

Budongo-Kaniyo Papidi forest is found in Murchison falls close to Kichumbanyobo gate 20km from Masindi town. It is the largest mahogany and natural forest in Uganda.

The main tourist activity is Chimpanzee trekking and chimpanzee habituation experience. The habituation is done during low season and it’s a process where one actively participates as you move with the chimpanzees and researchers as you learn their way of life.

During this process, the chimpanzees get used to man. This takes about 2years. The forest has over 600 chimpanzees, 250 butterflies’ species, 24 mammals, 450 tree species, 130 moths.

Other primates present in the forest are Red-tailed Monkeys, Baboons, Vervet monkeys, and the Black, and white colobus.

The best time to do Chimp tracking

Chimpanzee tracking in Uganda is done throughout the year but the best times to trek is during the dry seasons like December to February and June to July.

However, during the rainy seasons, the trails are slippery and make most roads leading to parks very inaccessible.

Permits and prices for chimpanzee tracking

Chimpanzee tracking permits for Kibale and Kyambura gorge are booked and purchased from Uganda Wildlife Authority. Most important chimpanzee permits are booked early in advance to avoid disappointments, especially during the high seasons.

One can either book or purchase permits to either track in the morning or afternoon, unlike the gorillas that only have a morning trek.

Clients who would love to track in Kalinzu can contact the National Forest Authority, and for Budongo one needs to contact Uganda Lodges.

What to pack for your chimp tracking

Additionally, Binoculars and a camera with extra batteries are important things to bring along.

Our Popular Chimpanzee Tracking Safaris Include:

In conclusion, there are different lodges in each park depending on the client’s budget. Therefore if you are planning for a chimpanzee tracking experience of a lifetime specify your kind of budget and the right accommodation will be selected for you.