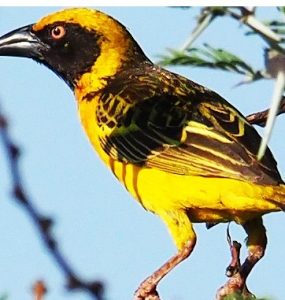 Bwindi Impenetrable Forest is one of the best birding destinations in Africa. There are 348 bird species have been recorded at Bwindi. They include 25 restricted-range species, of which 23 are confined to the Albertine Rift and four are globally threatened: African Green Broadbill -Pseudocalyptomena graueri-Vulnerable, Grauer’s Rush Warbler -Bradypterus graueri; Endangered, Chapin’s Flycatcher -Muscicapa lendu; Vulnerable and Shelley’s Crimson-wing -Cryptospiza Shelley- Vulnerable.

Tourists can not only visit Bwindi for mountain gorillas but the place is also a bird watchers haven. Bwindi has three bird species that are the only surviving representatives of their respective genera: African Green Broadbill, Grauer’s Warbler (Graueria vittata) and Short-tailed Warbler (Hemitesia Neumann). Indeed, both the broadbill and Short-tailed Warbler are thought to be more closely related to Asian- than to African species!

Many of the bird watching tours at bwindi forest are at the Buhoma area along the forest margins and on village paths or in the Ruhija section where forest birding and swamp birding take place with knowledgeable local guides. The gem for forest birding at Ruhija is at the Mubwindi swamp where some rare Albertine endemics and lifers can be observed in their national habitats. 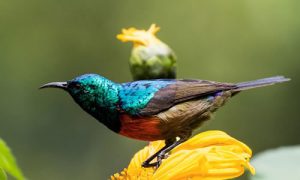 Where to Go Birding in Bwindi Impenetrable National Park

Most birding is done at Buhoma visitor centre on many trails near the River Munyaga, the birding sites at the Neck and the Ruhija sector of the park that includes; the visits to the Mubwindi swamp and a walk near the park offices and nearby farmlands. The bird list of Bwindi include;

Ruhija is likely to be among the highlights of every trip done during  Uganda safaris with the outstanding birding in the spectacular environments. Here birds are very many and easy to spot; many species connecting in assorted feeding flocks that are all through the day.  Starting early offers the finest opportunity of finding the remarkable batis, Mountain plus yellow-streaked Greenbuls, handsome Francolin, white-tailed crested Flycatcher, Cinnamon-chested bee-eater, Rwenzori batis, western Green Tinkerbird, red-faced woodland Warbler, as well as the Mountain marked plus chestnut-throated Apalises among many others.