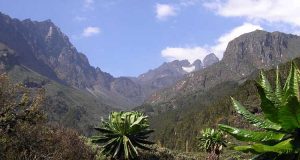 Activities in Rwenzori national park: In mountain Rwenzori there are two beautiful routes for climbers. These include gorgeous view point and the trail passes through the glacial lake, lush valley, dramatic mountain passes. It has the third highest peak in Africa that can’t be missed during Uganda Safaris.

The central circuit trail takes seven days. It’s such a tiresome circular tour to reach the high Rwenzori.  The climbing starts from Mihunga towards Bujuku valley; going through Nyabitaba for relaxation as your head to the peak of the mountain. Visitors who wish to join the central circuit after Bujuku valley have to pass through Scott Elliot and Fresh field so as to slope to Mubuku valley.

Recently, Kilembe trail has been reopened and it goes as far as to southern slopes of mountain Rwenzori. Kilembe trail head is close to Kasese town. Before reaching the central circuit at L. Kitandara. You pass through Nyamwamba valley and glacial lakes plus other attracting sites. Mount Baker is of the standard route scales but it makes the scenery shorter but interesting.

Nature Walks and Hiking in Rwenzori.

Ruboni and Turaco View is of the few communities that provide guided nature walks to the tourist few meters outside the park. Visitors hike 2300 meters above the sea level starting from river Mubuku, Baker and portal peaks. During the day, you can spot the Margherita peak that is snowcapped. squirrels, chameleons, vervet monkeys and many birds are some of the things that cannot be left out when hiking at mountain Rwenzori.

In Bakonzo villages, daily activities like grazing animals and growing crops, cooking, cultural dances accompanied with drumming, traditional costumes and folk tells makes their culture exceptional. Bakonzo villagers guide you while walking on foot to the hills of Mount Rwenzori and in their homesteads. Ruboni village is found in heart of the foothills of Rwenzori mountains. It is a home of about 2,000 Bakonzo.

In Lukonzo language, Ruboni means clear water. It has clear crystal stream. You will sight villagers with loads of crops and wood on their heads. There is also a rocky Mubuku River in this region. Birds like, tiny Cinnamon-chested Bee-eaters, sunbirds and Rwenzori Turaco. Squirrels, chameleons and vervet monkeys are also spotted. Snowcapped Margherita peak is also sighted during a day. Don’t miss to view Baker and Portal Peaks that are seen rising above the forest.

Mihunga villages faces the snowcapped peaks of Rwenzori Mountains. The Bakonzo have got used with the culture of the Rwenzori foothills that have good climate and steep green hillsides. It now over 300years with this community having no running water and electricity.

In the Turaco View Camp Site, visitors are taken through a cultural tour of the village. Traditional healers use herbs to heal different diseases. You can also tour village schools. A craft demonstration can also be performed for visitors by the community women and cultural performers.

Lucky visitors can spot colored turacos in the forest of Canopy. Other species that can be spotted are sunbirds, bee-eaters, black and white colobus monkeys.

This trail is about six to seven hours. You go through the holy valley and other great cultural sites for the Bakonzo tribe. A traditional healer will explain the powers of Muhima. The local black smith maker will try as much as possible to explain the spiritual meaning of the traditional Bakonzo stool. Other skills like fire making and basket weaving can be demonstrated by the Bakonzo craftsmen.

The nature walks lands you to the precious waters of river Kamusonge. A visitor can view mountain peak while taking shelter in the hut thus protecting self from equatorial sun. After the relaxation, you head to the museum which is thatched in Konzo design. You will sight objects used in the Rwenzururu Struggle. These include traditional dresses that are of significance to Rwenzururu kingdom.

Montane forest is the best place for birding.  Sunbird, robins, barbets and bee-eaters are some of the 217 bird species found in Rwenzori Mountains.

Birding is one of the main activities in Rwenzori national park with great chances to spot volumes of bird species. Out of 217 bird species located in Rwenzori mountains, birds like Sunbirds, Robins, barbets and Bee-eaters are the common ones sited in the high Rwenzori. Also you can watch birds like Swifts, Bearded Vultures and Black Eagles circling for prey on the higher slopes of the mountain.  Sighting from the other side of the mountain you will view species like Rwenzori Turaco and Long-eared Owl. 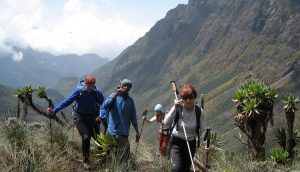